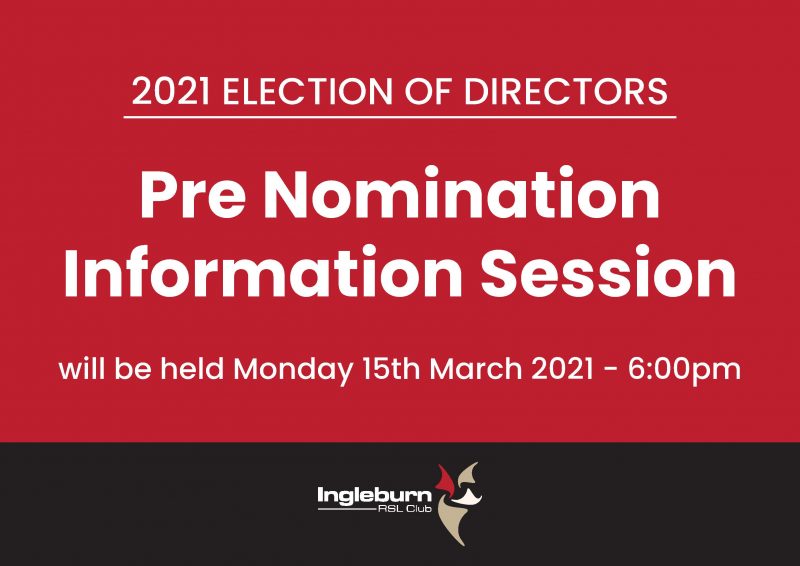 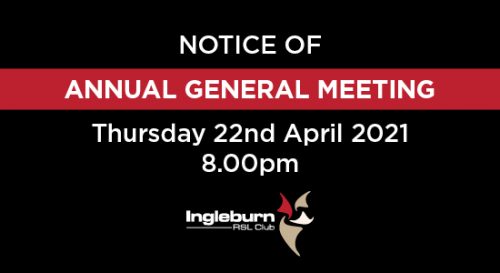 Members are advised that the Club’s Annual General Meeting and the election of Directors will be conducted in the manner set out in this notice and in accordance with the Club’s Constitution.

The date for this year’s Annual General Meeting is Thursday 22nd April 2021.

The Annual General Meeting will be held in the Bardia Room at 8.00pm.

This Notice sets out important information about the election process and the ballot for the election of the Board of Directors of the Club.

The Club’s Chief Executive Officer is the Returning Officer for the election and the Australian Electoral Company are assisting with the conduct of the ballot.

Closing of the Roll of eligible members

The roll of eligible members will close at midnight on Friday 2nd April 2021.

Two (2) directors will be elected this year for a term of three (3) years.

Members can nominate for election to the Board as directors only.

In accordance with the Club’s Constitution, the elected directors will elect a President, two (2) Vice Presidents and Treasurer from amongst themselves after the Annual General Meeting.

Members should review the Constitution and the Qualifications section of this notice to determine whether or not they can stand for and be elected to the Board.

If members have any queries regarding their eligibility to nominate for or be elected to the Board, they should contact the Returning Officer as soon as reasonably practicable.

Completed nomination forms must be returned to the Returning Officer via the Duty Manager (or such other authorised employee of the Club) between the hours of 10.00 am and 10.00 pm daily during the nomination period.

Nominations shall be made on the nomination form and shall be signed by 2 financial members and must be lodged with the Returning Officer (or the Duty Manager or such other authorised employee of the Club) no later than 10.00 pm on Wednesday 31st March 2021.  Each nomination must be accompanied by a recent 100 mm wide and 150 mm deep colour photograph of the nominee that will be posted along with the nominee’s name on the Club nomination board in the Club’s foyer.

A nomination cannot be withdrawn after the close of nominations and any anomalies contained in the nominations form must be rectified before this time.

Members are responsible for ensuring their nomination form has been correctly completed and their proposers and seconders are eligible to nominate members for election to the Board.

Qualifications for Election to the Board:

Members should be aware that the Club’s Constitution contains the following qualifications in respect of nominating for and being elected to the Board:

(b)        the remaining two (2) Ordinary directors may be Social members, Bowling members or Ingleburn Bowling Club Bowling members or Honorary Life Members who were previously Social Members of the Club.  For the avoidance of doubt, Service Members and Honorary Life members who were previously Service Members, Ordinary Members or Ordinary “A” Class Members can also nominate for and be elected to these positions.

(a)        has been cited to appear before the Board or a disciplinary committee on any charge and the member has been found guilty of such charge and either expelled or suspended for a period in excess of twelve (12) months within the period of two (2) years immediately prior to the date determined for the next Annual General Meeting; or

(b)        has at any time been convicted of an indictable offence; or

(c)        is a former employee of the Club whose services were terminated by the Club for misconduct;

(d)        was an employee of the Club, or any club that has amalgamated with the Club, within the period of three (3) years prior to nomination, election or appointment to the Board.

If more than the required number of nominations are received for election to the Board, a draw will be conducted by the Returning Officer to determine the order of candidates’ names on the ballot paper at the Club’s premises on Noon, Thursday 1st April 2021.  Candidates or their representatives and other members are invited to witness the draw.

The results will be announced at the Annual General Meeting on Thursday 22nd April 2021.

Note to members regarding financial queries:

Members who wish to raise any queries or seek information at the Annual General Meeting about the Financial Report or other matters pertaining to the affairs of the Club, are asked to give the Chief Executive Officer notice in writing of their queries or requests by Friday 16th April 2021. This will enable properly researched replies to be prepared for the benefit of Members. If questions are not submitted in this manner, the Club may not be able to provide a complete answer at the Annual General Meeting.

Any enquiries concerning this election should be directed to the Club’s Chief Executive Officer.